I am totally in love with one of the pieces we are playing in my next orchestra concert. Hebrides Overture by Felix Mendelssohn, a piece inspired by Fingal's Cave off the coast of Scotland. Now, I know what you're thinking: She likes it just because of the Scotland thing, but no. I loved it before our maestro told us anything about it. 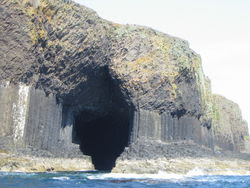 It begins with low strings and the bassoon that quickly becomes the entire orchestra playing at forte. The entire piece is a study in dynamics, each one extremely important. When we first started rehearsing it, we would stop countless times to observe the markings of pianos, fortes, crescendos, and sforzandos. I have never seen a piece dictated so precisely for dynamics.

The music makes me feel as though I am on a small boat, rocking on the waves as I travel through the caves. There are times when the feeling is almost one of being seasick. The piece is not technically difficult, but making it sound cohesive and dynamically correct is what makes it a challenge. I spend much of the work memorizing short passages so I can watch the conductor and listen to those around me.

Then, about 2/3 through is the clarinet duet part I am a part of. The introduction to this section is perfect, with the strings backing away dynamically and the oboe giving way to the first note by the clarinet. It is so simplistic, yet gorgeous (as most things played by the clarinet are.) If this were a movie score, this would be the romantic goodbye as the man heads off to fight the monster in the cave. Or the opposing army. Or whomever. As the music speeds up I can just imagine the scenes as the man fights his enemy with a sword, while the woman, still rocking on the waves in the boat laments his absence and prays for his return.

And I'll be honest with you. I've been sitting here listening to the last 30 seconds of the piece over and over again, trying to decide how the story should end and I just don't know. There is strength to the ending, with the entire orchestra playing, but the last thing heard is a leftover flute fading to nothing. So how does the story end?
Posted by Miss Scarlet at 8:38 AM

Awww...you just made me remember how much I loved playing music, telling those stories without actually speaking them.

Try this: no beast or opposing army to conquer, only the drama of the Scottish climate at its worst - in this case, a storm at sea which sends the waves and anything on them crashing against the rocks. Let's go with your two-people-in-a-boat scenario, only have one of them get washed overboard and rescued at great peril, after which the weather inexplicably calms (believe me, 'capricious' doesn't cover it over here) and the storm recedes into the distance.

Love the "whomever" in the penultimate paragraph. Linguistic pedantry rocks!