The View* is talking about splitting group checks and how some people always get screwed and some people are always cheap. I tend to get screwed. Actually, I take that back. There are certain groups of people where, if I am the one adding up the check, I know I'm going to be paying for more than what I had. My close** friends never stiff me, but some of my acquaintances suck at life. One time I looked at my check (which was supposed to be me and one of those said close friends) and realized that there was food on the bill, yet I had not ordered any food. Upon asking the waitress and a few other people, apparently one of those sucky people had "paid on another bill", which was supposed to make up for the fact that they ordered food. Our waitress took some of it off, but I knew she'd end up getting in trouble so I just paid it. I was pissed.

The best way to do it is to have your own check, or to pay as you go, but sometimes you just don't want to worry about it until the end. Another time I can remember was me, my sister, and two close friends and since we all trusted each other, we were on one bill. Well, then other people came and joined up and apparently their drinks were on our bill. Yup, once again I got screwed and paid more than I should have. (Oh and yes, that same a-hole was there both times. Coincidence?) It's like I get punished for staying until the end. Next time I'm out with that same person I'm going to make sure I leave before he does.

On The View, Whoopie had an interesting suggestion. She said that before everyone even orders, they should put $20 in. Then, if people can't find something that's covered with that, then they either put more in or order something else. it's easier to divvy up with food, but it's the drinks that make things messy. I like it when I'm the only one drinking a certain type or beer because then it's easy to tell what I owe. "Oh, those six Sam Adams? Those are mine." hahahah, six. I love it. 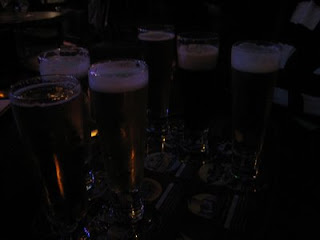 Email ThisBlogThis!Share to TwitterShare to FacebookShare to Pinterest
Labels: checks, eating out, paying, sons and daughters

Dude! I'm starting to only bring cash now. I just pay for what I ate/drank and let everyone else figure the bill out. adn then I refuse to pay more.