Posted by Miss Scarlet at 1:11 PM No comments:

Posted by Miss Scarlet at 1:25 PM No comments:

I traveled a lot in August and while that sometimes means more reading time, it didn't this time. Anyway, let's dig in! I'm way off track for getting to 101 by the end of the year, but it's still my unofficial goal.

I was going to get back on track with my Radiohead bracket, but omg the site is no more and my bracket is lost! I am kind of sad about this because it was actually a lot of work setting that thing up!!!!

I guess now, if/when I redo it, I can put their latest album on it. *Silver lining*

Email ThisBlogThis!Share to TwitterShare to FacebookShare to Pinterest
Labels: bracket

By the Numbers Or, Why I'm So Tired

The past month has been pretty crazy:

No wonder I'm tired:) But happy and fulfilled!
Posted by Miss Scarlet at 3:51 PM 1 comment:

Oops, it's almost August you say? My bad! I've been very very busy, but here is what I read in July!


Posted by Miss Scarlet at 5:44 PM No comments:

I'm biting the bullet and entering Pitch Wars this year! I'm nervous, but there are only positives to entering, right? 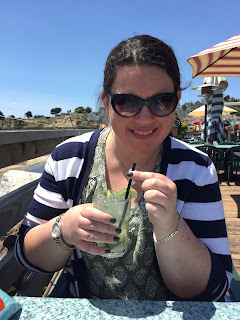 I pay the bills by working in a large, chain bookstore (you know the one) where I'm happiest when I'm organizing the Teen section or talking about the latest book I've read (and am most likely obsessing over). I post all of my staff recommendations on Instagram!

My hobbies, though, are what really enrich my life and I have many of them: I play the clarinet and bassoon in a community band, I have a Gilmore Girls podcast, I love photography, I watch a million TV shows and films and, of course, I read and write a lot! Oh, and I have a bit of an obsession with tennis. Er...I guess I need to be honest here: I am completely and irrevocably in love with tennis. If only watching tennis counted as working out!

Despite always being a voracious reader, I never thought I could write something of my own. I am not that person who, as a child, wrote my own stories and dabbled in fan fiction because I loved it. In fact, I kind of hated writing. I wasn't very good at it and I never gained much confidence for it while in school. I was proud of myself for doing well enough on my AP Lit exam so I would only have to take one english class in college. (I know!)

While I was always much better at math and science (I double majored in Biology and Music at the University of Mary Washington in Fredericksburg, VA), I have always been extremely creative. I have the type of brain that exists outside the box and I think that is why I love books so much. I have such an appreciation for the minds that think up the stories I love and in the past few years I finally realized that I could do it, too!

I wrote my first manuscript (a contemporary YA romance about a vague breakup), but set it aside because I figured it was my "terrible first book":) What I wrote next, and what I'll be querying is a YA adventure that was inspired by my own love of music when I imagined a world where it was illegal. THE MOVEMENT is told in dual POV and my male MC is based on Dave Grohl. (They say to write what you know and I have definitely done that!)

Thanks so much to Brenda Drake and all of the mentors out there! I'm excited! (and nervous!)

Check out the main blog hop page to find some other awesome writers!

I was never really into fantasy books.

Sure, I'd love for a sparkly vampire to crawl through my window and sweep me off my feet, but that's like saying you like spicy food when really you just like pepper. Vampires are practically mainstream now.

But in the past couple of years, I've found myself drawn to the fantasy aisles of the bookstore more. My love for contemporary novels has cooled just a bit and I'm now craving things a bit less real. A bit less like real life.

I think I started reading more YA years ago because I related more to the less jaded, unmarried, childless characters than those in so many adult fiction books. I didn't want to read about women who were getting divorced or dealing with preschool applications. Or school. Or work...or any of the mundane things I actually do deal with in my life. And I think that's why, lately, I've been reading way more fantasy than contemporary. I need a better escape.

Last night, I made the fairly long 4.5 hour drive home from the beach and listened to HEIR OF FIRE by Sarah J. Maas the entire way. It's the third in the THRONE OF GLASS series and it's incredibly epic and about [fill in fantasy word I can't use because it's a spoiler]. I was lost in that world the entire drive, enjoying the wonderful storytelling as I made my way home. And then, once home and inside, I looked at twitter and saw that something terrible was going on in the world: more people were being shot and killed.

I kind of wanted to get back in the car and drive some more. Instead, I got off Twitter and read more fantasy before going to sleep. Even if I'm reading for escapism, it doesn't mean my heart doesn't hurt for so many people at the same time.

A war is on the horizon in the book I'm reading. One that involves magic and fae and swords and ancient stones and good vs evil and it's intense! But it's the escape I want and need right now. It's a story that can translate thematically to the real world, but it's different enough that I can let myself get lost in the fantasy.

I like that for 300+ pages of a book I can think about things that aren't real: fae wars, ancient curses, immortal kings, shapeshifters, magic, and yes, even vampires sometimes.

I used to only want to read about characters who were real, people who could exist in our world...but now, I'm gravitating toward worlds that aren't too like ours because I can read about our problems all I want just by checking out Twitter or turning on the news, and sometimes, I need to get away from it. Away from our world. So, thank you, writers, for sharing your imagination and creating these amazing worlds for me to escape to. Thank you for writing fantasy.


Posted by Miss Scarlet at 1:35 PM No comments:

It felt like I read a lot in June, but then I checked Goodreads and it was only five!? Ugh, that's ridiculous. Having to work ruins things!

Posted by Miss Scarlet at 1:08 PM No comments:

A Court of Music (An ACOTAR Series Playlist)

The connection between writing/reading and music is something very special- two of my favorite things in the world that work together so well. I love that so many writers use music to help their writing and I love when a reader finds a piece of music that reminds them of a book.

Sarah J. Maas is a writer who talks a lot about the music she uses when writing. She makes her Spotify playlists public and, in her newsletter, she shares many of the specific pieces of music that go with certain scenes. I may have cried a little when she revealed that it was Beethoven's 7th she imagined being played for Feyre while Under the Mountain. I cry every time I hear that 2nd movement..including when I played it in orchestra. (Awkward. Like, I legit was tearing up while on stage.)

So, it was inevitable that I would create a playlist for A COURT OF MIST AND FURY, my new favorite book. Sooo many songs were reminding me of the book because Sarah is so good at writing words that convey a ton of emotion- just like good music!

So, check out what I came up with in my Spotify playlist below. I started out just picking songs that reminded me of ACOMAF, but I wanted to encompass the entire story from Feyre first entering Prythian to Under the Mountain, to her depression and coping, and of course, to what happens after that. There are some spoilers below, so be warned. And please- let me know what songs you would include!


Posted by Miss Scarlet at 9:37 AM No comments: